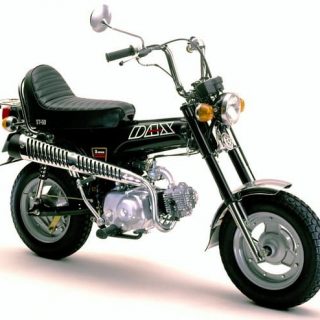 For the last eight or so years, France’s Pierre Dhers has been churning out one-off builds under the banner of Freeride Motos Racing. On top of the immaculate and well-executed nature of Dhers’ bikes, the shop’s work is made all the more impressive by its immense and diverse range of projects, having previously completed everything from vintage scramblers to competition-grade supermotos to modern superbike-based cafe racers. And for his latest build, Dhers is further diversifying his custom moto portfolio with a surprisingly involved little Honda Dax flat tracker that maintains Freeride’s high standards for performance.

Though completed this year, the tale of this Dax-based tracker actually began in 2019. At that year’s Wheels and Waves event, Pierre met Kousuke “Baka Musuko” Fukuda and Kazuo Fukuda (of Cheetah Custom Cycles and Buddy Custom Cycles fame), where the Japanese father and son builders campaigned one of Freeride’s Suzuki 450 RMZ racers in a flat track event. After they’d flown home to Japan, Pierre maintained a relationship with the Fukudas, occasionally messaging and routinely keeping tabs on Cheetah and Buddy’s social media channels. Fast forward to 2021, and after seeing a series of “Dax-Trackers” on one of the shop’s Instagram accounts, Pierre instantly fell in love with the idea and promptly set out to build his own.