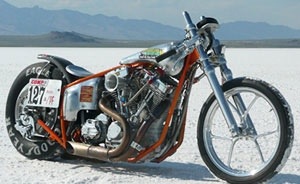 Wink Eller Is A Hero of Mine

British master Ian Solly of ” 7 Ages “built unusual custom based on BMW R80. Almost every detail of the motorcycle converted or replaced. For example, the frame is converted into a hardtail, and the […]

Classic Bobber Fox is a new project of the guys from the workshop of “Old Empire Motorcycles “. The basis they used motorcycle Royal Enfield Bullet 500, which for decades produced without any changes. In […]

Motorcycles BMW R-Series of the 1980s are considered extremely reliable and sturdy machines. The guys from the “Hook Motors” with the support of “Totti Motori” built a cool scrambler based BMW R65. According to the […]

Alec Sharp from the British custom-shop “Old Empire Motorcycles” is engaged in the construction of the Bobber. His new bike is called EFI and is based in the Indian motorcycle Royal Enfield Bullet Electra 2009. […]

Custom Enduro Based on Montessa Enduro 75L by Macco Motors

Custom Enduro Monty is a new classic custom bike that is customized by Spanish specialists Macco Motors who is living and working in the south of the country. The basis they used motorcycle Montesa Enduro […]