A Motorcycle That Nearly Does The Ton Running On Pond Scum

The university of San Diego owned US Track T-800CDI has used pond scum, well, make that algae, to fueled their motorcycle speed record-setting machine, and it moved out pretty good in achieving a respectable 96.2 miles per hour.

Devin Chatterjie reached 96.2 MPH on 100% algae-derived Green Crude diesel fuel supplied by Sapphire Energy Inc., one of the world’s leaders in algae-based oil crude production. Together, they established the fastest and only known records to date for an algae-fueled motorcycle.

The next official speed trial? The team plans to crank it up again at the dry lake in El Mirage, Calif., on May 19th.

“The Texas Mile organizers, racers, and spectators were extremely supportive of our team during the speed trials and I would really like to thank them for the warm welcome and opportunity to put algae fuel to the test. I am excited to work with them more in the future,” said Kristian Gustavson.

Gustavson led a team of UCSD students in making a batch of the biofuel themselves under the supervision of Dr. B. Greg Mitchell’s Scripps Photobiology Group. They also got a hand from the San Diego Center for Algal Biotechnology. The student group grew and harvested algae from ponds at the Carbon Capture Corporation’s facility near the Salton Sea and at a greenhouse facility on the university’s campus, and afterthe algae harvest, they took teh biological material containing “important fuel precursor molecules” and sent to that glop to Dr. Skip Pomeroy’s Laboratory at UCSD. In the laboratory, the lipids and fats were then extracted and converted into usable diesel fuel by the Biofuels Action and Awareness Network.

San Diego-based Sapphire Energy provided the diesel fuel derived from their algae-based Green Crude. Sapphire’s Green Crude differs significantly from other forms of biofuel because it is made solely from photosynthetic microorganisms (algae), using sunlight and CO2.

What’s so awesome about that? The finished product isn’t dependent on food crops or farmland; doesn’t use potable water; is low carbon and scalable; and is a 100% renewable petroleum replacement which can also be refined into replacement gasoline, diesel and jet fuels.

Gustavson, a recent graduate of the Center for Marine Biodiversity and Conservation’s MAS Program at the Scripps Institution of Oceanography, is a co-founder of Below the Surface, a nonprofit organization dedicated to exploring waterways and educating the public about issues pertaining to water. He started the One Barrel for Baja Project in order to synthesize enough algal biodiesel to compete in various speed trials and the grueling Baja 1000 race. 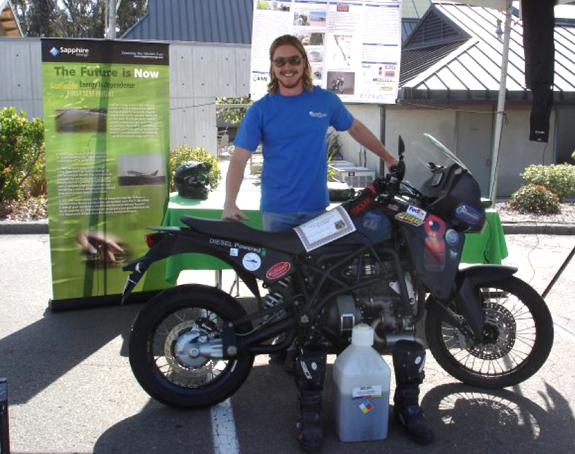