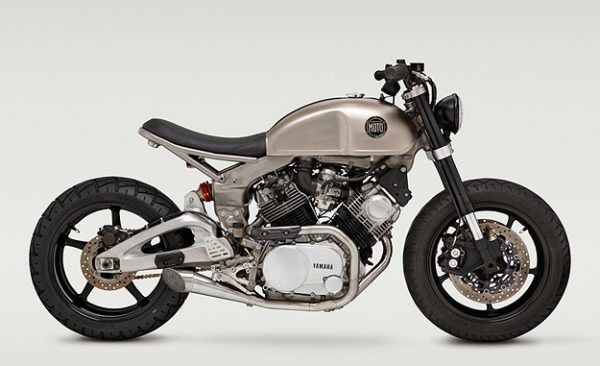 It was inevitable - a Japanese manufacturer would one day design a V-Twin for the US Market - and Yamaha's Virago was that attempt.

Yamaha was adamant in the early 1980s that it would outstrip Honda in sales in competition at both the corporate and dealership levels.

Yamaha reasoned a slew of new designs might do that, and one of them, the V-twin SOHC, two-valve, air-cooled engined Virago with a 75-degree included angle between the cylinders was designed by their R&D department to take up the challenge.

There's nothing unique about a 75-degree engine, save that it would take up less room than, for example, a Ducati's 90-degree engine. Yamaha designers appeared to be focused on creating a sporty bike with this new engine, employing a high-tech semi-monocoque frame with a single rear shock absorber.

The bike featured a large gas tank, flat handlebars, a long saddle, a totally enclosed chain final drive, speedo and tach over the headlamp and dual discs upfront. In 1981, Yamaha introduced the TR1, a 981cc sport model with a clearly oversquare bore of 95mm and a short-stroke of 69.2mm.

The XV920R was a comparable bike sold in the United States, with a 920cc engine with a narrower bore of 92mm and the same 69.2mm stroke. This model was not high on the "Wanted" list of American dealers. The speed demons demanded in-line fours, not a mediocre take on an Italian theme. Nobody has ever explained why we got the 920 version instead of the 981, and that marketing decision would make a wonderful MBA thesis.

But Yamaha wasn't finished, and they unveiled the XV750 Virago, a cruiser-styled bike with the smallest V-twin engine, a 748cc engine with a bore of 83mm and a stroke of 69.2mm. With that Monoshock rear, no visible frame, a stepped saddle, footpegs slightly forward of typical, a muffler on each side, and a blob of a gas tank, it was an odd-looking duck.

The shaft drive on the Virago 750 appealed to the non-mechanical crowd who just wanted to put gas in the tank and go. Cam-chain tensioners with self-adjustment are also available. The engine was suspended from a pressed-steel, box-type backbone structure that had been a mainstay of Japanese chassis building for the previous 20 years.

In the 1970s, Americans preferred the look of tubular frame construction, but Yamaha could get away with using pressed steel since it was completely hidden. In addition, the frame served as an airbox for the two 38mm Hitachi carburetors. The Virago came with all of the normal perks. The back wheel had a drum brake, while the front wheel had a single disc brake. The damping and spring preload of the shock could be adjusted. The tachometer was powered by electricity, and the turn signals were self-canceling.

The 750 Virago was a hit, while the XV920R was a fiasco, and the latter was dropped from the lineup after the second year in the United States. But, the marketing experts reasoned, if the 750 Virago was such a hit, why not make a bigger one?

Yamaha Motor Corp. USA gave dealers two Viragos in 1982: the 750 for just over $3,000 and the new 920 for around $3,700. It wasn’t a difficult task to convert the latter's chain drive to a shaft drive thanks to the thoughtful initial design at the factory.

Externally, the two engines were nearly identical, thus the same frame could be used. The Virago models' camshafts were altered from the R version to a more discrete lift, however, the R's larger 40mm carburetors were still employed.

For the extra few hundred, the buyer received not only 170 more cubic centimeters, but also a slew of other enhancements. Though the drum remained at the back, a second disc brake was installed upfront. The DeCarbon shock was nearly identical to the 750s, but with higher spring rates. The fork was far more complicated, with a single fitting for air pressure adjustment and a knob at the top of each fork leg with four rebound-damping positions. The bike's wheelbase was just over 60 inches, and it was very agile.

On the 920 Virago's dash, above a rectangular headlight, was a very clever liquid crystal display. This bike included a semi-analog tachometer and a digital speedometer, as well as a computer monitoring system that could alert the rider when the taillight was out. Start the engine, and the instrument panel ran through its checklist, displaying the speedo's possibility of reaching 200 mph, that despite the fact that the rider's DOT-mandated, real-life, on-the-road speedo maxed out at 85 mph.

The handlebars were made up of two components that were fastened to the steering head and could be loosened and swiveled back and forth for a total of six different configurations. The package was well received by the buyers. Even though it did have a weird appearance to the American eye, it was a lot cheaper and a lot more comfortable than a Harley Sportster.

Then Yamaha became serious about cruiser styling, recognizing that these customers appreciated the classic look. The Virago was redesigned in 1985 as the XV1000, with a 981cc engine and a new frame. The engine remained a stressed member, but there were now standard dual shocks in the rear, over and under mufflers on the right side, and the footpegs had been shifted forward.

The air cleaners on the carbs were now exterior, with chromed plastic protruding from either side, and chrome was generously applied throughout. Above the spherical headlight, a normal speedo and tach debuted. This XV1000 Virago went for $4,500, which is about the same as a Sportster.