It appears Chris  “Toro” Meyer, has had a wild ride through this life so far, and if all goes to plan, it’s going to get a lot wilder in the next year.

Toro, aside from building this really fine Triumph Bonneville custom, The Bonneville Black, is planning to make a run at a speed record at, you guessed it, the Bonneville Salt Flats some time in 2013. 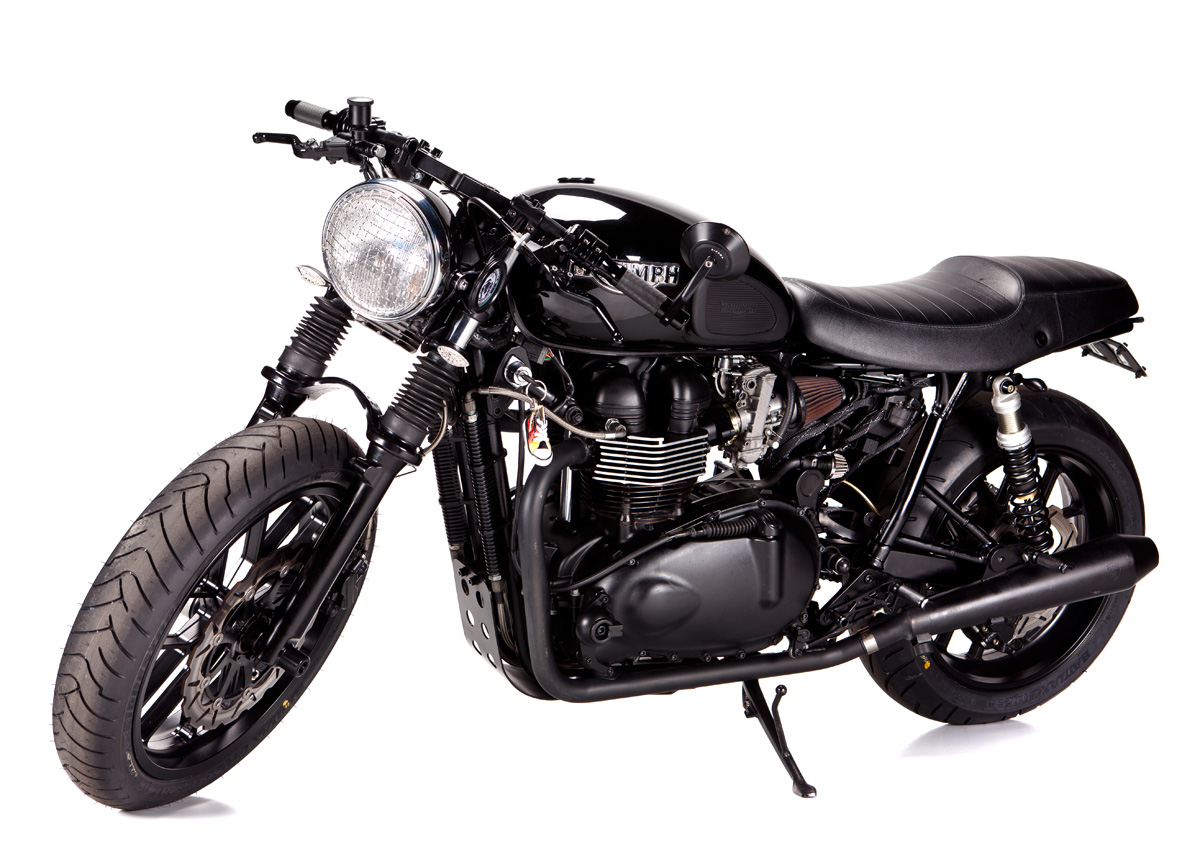 Meyer now calls Morrisville, North Carolina, home, but he’s currently planning a move to Houston, Texas for his work as Systems Design Engineer for an automation company. His job takes him all over the world and he says it gives him a chance to own, ride and gawk at all manner of motorcycle variations. His quest has taken him to motorcycle shops, shows and museums throughout the US, UK and – all over Europe and Asia.

Aside from being a world traveler, he’s also an administrator for the Brit Iron Rebels (founded by Poison Drummer Rikki Rockett), the drummer from that awesome hair band, Poison.  The Brit Iron Rebels came together in 2004 as a gang of hooligans from around the world dedicated to the preservation, restoration, and promotion of classic and retro-styled British motorcycles.

“I started my love affair with motorcycles and motorcycling at a very early age. My step-father, a non-rider at the time, purchased the first motorcycle I ever rode – a 1974 Honda MR50,” Meyer said. “I immediately knew motorcycling would be become a lifelong passion. I’ve owned and customized over 20 different motorcycles across multiple brands. I began my current focus on Cafe Racers and Bobbers around six years ago, and continue to look forward to – and dream about – what’s next in the motorcycle world.”

According to Meyer, his favorite bikes can be described as “Less is More” machines.

“I build and customize motorcycles to suit my tastes rather than the masses,” Meyer said. “If I don’t have passion for it, then how could anyone else? I appreciate subtle styling cues and attention to detail.  Motorcycles of all marques appeal to me for their craftsmanship, their beauty and the emotion that I feel in regards to the particular motorcycle.”

And he’s not the only one paying attention to the details. Meyer’s bikes have taken a long list of titles at various bikes hows across the nation and The Bonneville Black will take its place on the line at the Progressive International Motorcycle Show in Charlotte, North Carolina next week.

What’s next? Oh yeah, there’s that Bonneville Salt Flats thing. Meyer plans to pull together various components from a pile of 2006 Triumph Scramblers ( he has  a total of five waiting for their shot at glory) to be the foundation of his 2013 Land Speed Record project for next year. He’s working on sourcing parts and design plans to build his modern Triumph  for the 2013 Bonneville Speed Week – and it will feature a double-engine design.

If you need to check out more of what “Toro” has been up to, check out these handy-dandy links:
http://www.britironrebels.com/botm6.shtml
http://motochimp.blogspot.com/2011/09/toros.html
http://www.joshuahoffmanphoto.com/album/toros_bonnie

The inside skinny on Chris “Toro” Meyer’s Bonneville Black: