Ron Finch Is the Antonio Gaudi of Grease and Gasoline

There are lots of folks who build custom motorcycles. Some of them are craftsman, some of them are hobbyists, some are visionaries but Ron Finch is an artist with a distinctly unique vision.

Finch is, for lack of a more fitting metaphor, the Antonio Gaudi of Grease and Gasoline.

Metalworker, painter, artist, and custom bike builder extraordinaire, Finch is an eccentric and a legendary force in the history of custom motorcycle building. 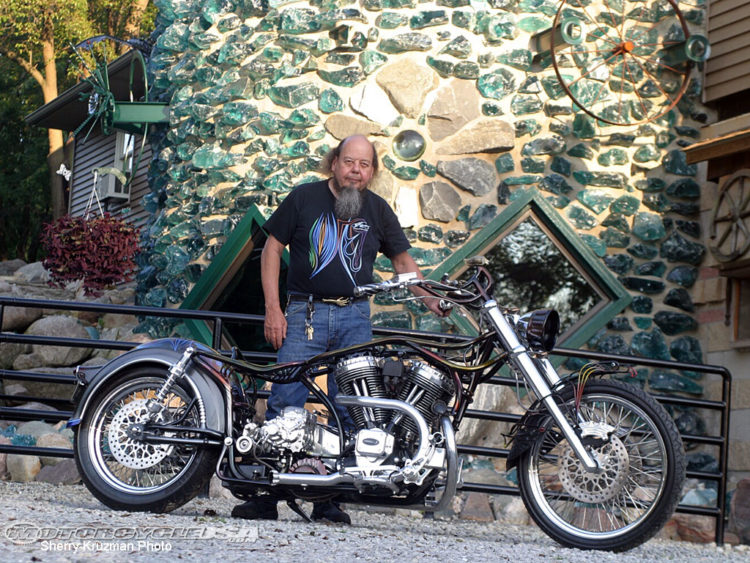 Finch made his entrance into the world in Ferndale, Michigan in 1939. His mother worked as a seamstress and handmade all of his clothes. Dad was an expediter at Chrysler

“Kids at school made fun of me because I had homemade clothes, but I know mother was one of my artistic influences,” Finch said. “She made beautiful quilts, and I think that’s where I began to learn about the combination of colors. My father never missed a day of work, and I expect my work ethic came from him.”

Never one to enjoy formal schooling, Finch nonetheless got his diploma at the insistence of his parents.

His odyssey through his true calling began by customizing bicycles.

A 1952 BSA Golden Flash served as his first motorcycle, but after the addition of a peanut tank, an ass-busting Bates seat and a custom paint job, he’d found his way.

After stints working at real jobs and running his own business, Finch began experiencing a malaise he couldn’t shake.

“It was killing my creativity. As the business of running a business got bigger, I could feel my creativity melting away.” Finch said. “This is not how it was supposed to be. One day I fired everybody and turned all my attention to my art.”

Filmmaker Danny Grinnell’s documentary featuring Finch is in post-production and needs funds to help him complete the project. Watch the teaser to “Ron Finch – That’s All You Get,” and if you love custom motorcycles, I guarantee you’ll want to see the whole film finished.

Finch opened his Finch’s Custom Styled Cycles back in 1965, and independent filmmaker Grinnell has been working hard on a documentary about the legendary custom bike builder and could use help funding the final project.

Finch is a true American original and if you’ve seen his work, you know how important this project is.

“I’ve been filming a documentary about motorcycle legend Ron Finch since last June,” Grinnell says. “I’m in post-production now and I’ve started a Kickstarter Project to raise the completion funds. People that donate to the project get movie merchandise rewards such as digital downloads, movie posters, company logos in the credits, coffee mugs, t-shirts, signed movie handbills, and even signed Ron Finch Artwork.”

What more motivation do you need?

Check out the teaser here and make sure this doc gets seen by The People:

Check out some very nice photographs of Finch and his work at Sherry Kruzman Photography here… and thanks to Ed Youngblood for the historical background. 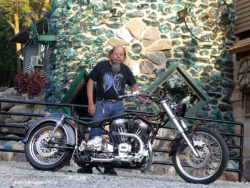