Page 12 article text (OCR)
12 DECATUR HERALD Decatur, Illinois, Saturday, November 20, 1976″ Oblong Prospective Little Mini Champion David Shawver and sophomore them up with. It will be important for us not to get into foul trouble.” Terry is an excellent floor general and Ray Titsworth is a “pure shooter,” Pensyl says. Add defensive ace Blaine Had-dix and Hutsonville fields a solid backcourt. Marshall’s strength will more likely be on the front line than in the backcourt. Included among Coach Carrol Bennett’s six lettermen are 4, Randy Ryan, 6-3, John Morris and Bob South worth each averaged between seven and eight points. Manuell says he expects Kansas to be a strong rebounding team. “Just how well we can score and play defense remain to be seen,” Manuell said. H e added that Bruce Sloat and John Holt have looked good and are potential starters. Cumberland has a new coach Jerry Flake, who replaces Bill Waldrip. Flake has coached in Indiana and Louisiana. He says he’ll probably shy By MarkTupper With four regulars returning from a team that tied for second last, season, Oblong High School is the pick to win the basketball championship in the Little Illini Conference. Oblong’ will receive strong Opposition from Hutsonville, which also has four experienced players and beat Oblong three times last season. Carning the weight for Ob-longwill be Steve Week, 6 foot 3. Week averaged 17 points last season. Coach Maury Hough says. Week is a complete player. “He can play inside or out. A good ball-handler and shoo-ter.e-‘r,:. Week’s versatility has made him’ a possible starter in the backcourt,- despite his height. Brian Hlghsmith, 13.2 points average, and junior Jerry Sanders give. Oblong a pair of solid shooters : and ball-handlers to go with Week. Terry Krick, 6 foot 4, will hopefully uhold things together inside. “He should become more consistent,” Hough said. ” We Ve counting on him for rebounding.” Steve Holliday, 6-2, will also be counted on for rebounding support . John Stoll, 6-2, falls 5nto that category, too. Oblong iwould have been a more convincing choice as the conference champion if 6 foot 5 Mark Gillaspy were on the roster. .Hough says he’s not for disciplinary reasons. Hutsonville figures to mount the-major challenge to Oblong’s “trek to the championship. 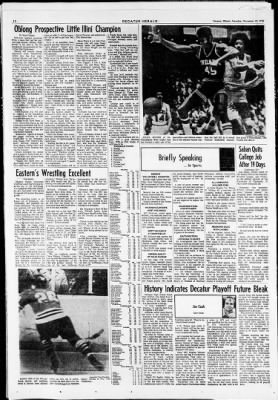