Used Motorcycle Sales Scams And How To Avoid Falling For Them 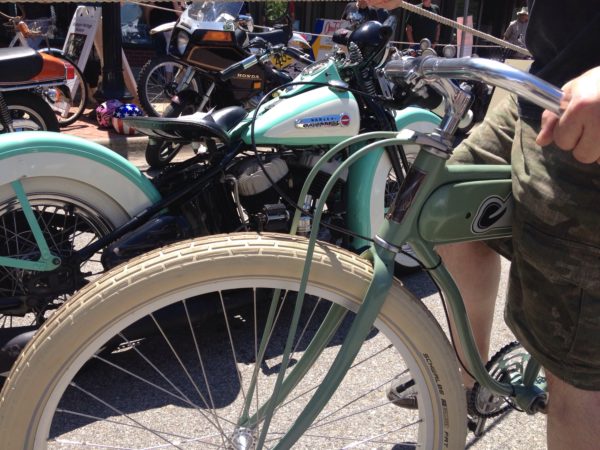 This week a man in Nashville, Tenn. was taken to the hoosegow after authorities caught him – and an accomplice – stealing several motorcycles from sellers who had advertised on Craigslist.  To further complicate matters, some of the buyers who bought the bikes from the thieves then resold the bikes.

One Jerry Pinkerton finds himself in hot water for a series of Craigslist-centered felony thefts. The 30-year-old Pinkerton answered ads for motorcycles for sale, told the owners he wanted to “test drive” the bikes,  and then just kept on riding and left the sellers waiting for his return.

Pinkerton and his alleged accomplice, Richard Roberts, resold the bikes, and authorities now say the pair were responsible for stealing half dozen motorcycles.

After unraveling the whole sorry scam, Nashville Police officials say those who unknowingly purchased the stolen bikes are out their cash as well.

“We recovered four cycles last night from one guy who bought them,” said a Nashville cop.

Pinkerton said he recently sold a stolen motorcycle to a man in Wilson County.

The whole affair brings up a couple of important points you need to consider if you’re selling a bike.

One, don’t let anyone “test drive” your vehicle before they hand you their driver’s license and two, don’t buy or sell a motorcycle without a title changing hands or at the very least, a notarized bill of sale.

Ebay and Craigslist transactions can also be fraught with peril, and here’s an example:

A guy says he wants to buy the bike, but it has to be PayPal, and he’ll give you a certain sum for your motorcycle and says he’ll add a sum to the transaction for you to handle the shipping for the bike. The shippers show up, you hand them the “buyer’s” money to cover the shipping, and they leave.

Except, it actually ends up this way:

Your bike reaches the shipping destination, the “buyer’s” pals load it off the dock and drive off. Within a few hours, the “buyer” contacts PayPal and reports the entire transaction as a fraudulent one. PayPal gets back to the “buyer” and finds the bike was delivered to a state other than the “buyer’s” address. The “buyer” tells them, “Why would I have a bike delivered to Connecticut? I live in New Jersey.”

PayPal says, “Yeah, why would you have a bike delivered to Connecticut?” They check out the signature on the shipping bill, which of course you signed when the shippers showed up, and they tell the “buyer” they’ll remove the transaction – and then come after you for the whole amount.

It will all work out in the end when the authorities find out the PayPal transaction was charged to a stolen credit card, but in the interim, you will be seriously annoyed – and out one motorcycle.

How do you avoid falling for this or some variant scam?

The moral of the story is this: you never sell a motorcycle, or for that matter anything of value, without seeing some identification and transferring title before the item leaves your possession. Never.

Feel free to use PayPal, it’s a great way to handle transactions, but make sure you have some ID from the buyer should anything turn south later. Even a “cashiers check transaction” can bite you in the ass, so do things right and make sure you know who you’re dealing with before you close the deal…

If you do get scammed? Call the U.S. Secret Service at (202) 406-5572 and the consumer protection division of your state attorney general’s office and save someone else the same headache.