One man more than any other influenced the design and intent of motorcycles throughout the world, and the company he created against all odds, one that would become the most famous motorcycle manufacturing company in history, was founded in 1948 to realize his dream.

That man, Soichiro Honda, was 41 years old at the time of his greatest achievement and the one which would provide his lasting legacy to motorcycling.

Honda, who had designed and built a bicycle engine a year before forming his Honda Motor Co Ltd, set out to create his first “motorcycle.” That bike was the two-stroke Honda Dream D, and the four-stroke version (the Dream E) which followed was made to satisfy the needs of amateur Japanese racers and ultimately morphed into the now much-prized Benly J.

But it wasn’t until 1958, with the launch of the Honda Super Cub, that Honda made motorcycling gold from lead. The Super Cub went on to become the largest-selling motorized vehicle of all time.

It was also during the 1950s when Honda became the first Japanese manufacturer to export its products to the United States and the first marque to build a dedicated race circuit for developing their technology. It was this race circuit – and the experience his team garnered from its use – that led Honda to enter the famed Isle of Man TT races for the first time in 1959. That same year saw Honda open the first iteration of American Honda Motor Co in Los Angeles, CA. 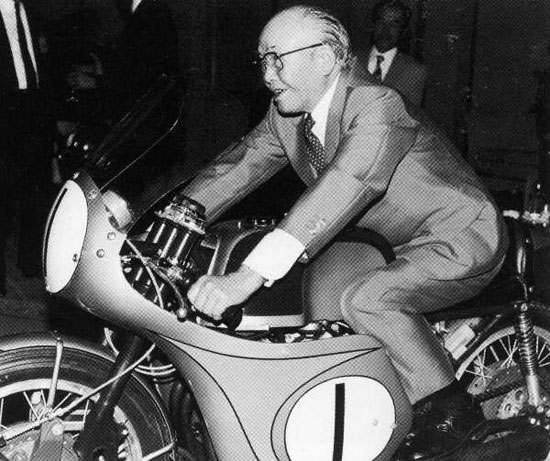 Honda scored again, and changed the way motorcycles were designed and manufactured, in 1969 with the introduction of the Honda CB750. It was the first modern mass-market four-stroke machine and also the first to utilize a disc brake. The CB 750 was also cutting edge in that its design process marked the first time a motorcycle manufacturer applied the principles of ergonomics to their product.

Success followed success in 1974 when Honda launched the first GoldWing. That machine’s water-cooled motor, shaft drive, unparalleled comfort for the time and predictable highway handling made it an immediate hit. In 1986 and 1987 the Honda VFR750F and Honda CBR600F moved the nascent market for “sport bikes” into affordability and directly to the forefront of the motorcycling consciousness.

Tadao Baba, as an extension and re-imagining of what a sport bike could be, then designed CBR900RR FireBlade.

Soichiro Honda had raced autos and began to imagine what it would take to succeed in Grand Prix motorcycle racing, as far back as 1955. It was that competitive drive that led Honda machines and teams to win their first Grand Prix victories with Mike Hailwood aboard in the 125cc and 250cc classes. Those titles were followed by wins in the 500cc class by Freddie Spencer, Wayne Gardner and Eddie Lawson, and no less than four consecutive Grand Prix titles with Mick Doohan behind the bars. Honda’s men also won the final two-stroke 500cc championship – with the great Valentino Rossi aboard – and they retained the title for the first two years of MotoGP with the Honda RC211V.

The Wisdom of Soichiro Honda

On seeing his first motorcycle:

I could not understand how it could move under its own power. And when it had driven past me, without even thinking why I found myself chasing it down the road, as hard as I could run.

On creating a team:

If you hire only those people you understand, the company will never get people better than you are. Always remember that you often find outstanding people among those you don’t particularly like.

Success represents the 1% of your work which results from the 99% that is called failure.

On the meaning of life:

The value of life can be measured by how many times your soul has been deeply stirred.

On finding a direction for your efforts:

There is a Japanese proverb that literally goes ‘Raise the sail with your stronger hand,’ meaning you must go after the opportunities that arise in life that you are best equipped to do.