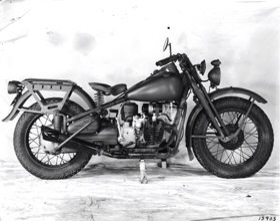 The US Military couldn’t help but notice some of the advantages of the German designed BMW R71.

The R71 used an opposed twin motor that positioned the cylinders for better cooling along with an enclosed shaft drive which lowered drivetrain maintenance and increased reliability.

So the US Army contracted Harley to build a new motorcycle based on the BMW design.

The result was the model “XA” and in many ways it was superior to the current WLA.

The XA was powered by an 45 cubic inch opposed twin motor mated to a foot shifted four speed transmission. This allowed the operator to keep both hands on the handlebars at all times which was a definite advantage when riding in rough terrain.

It had a larger fuel tank to extend its range, a larger capacity battery, centrally mounted air box, wet sump to eliminate the external oil tank and radio shielded ignition.

It ran up to 100 degrees cooler than the WLA and the lower center of gravity provided better handling.

Later versions became the first Harley-Davidson’s to use a telescoping fork front end. Production of the XA was the highest of the WWII prototypes, with 1,011 units built for military tests.