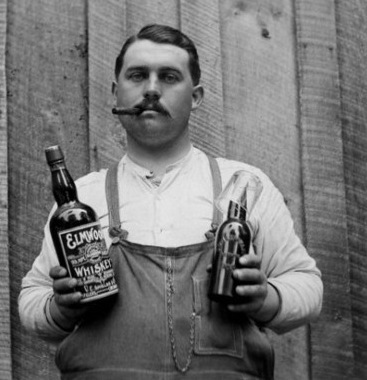 There are few drinking traditions as sacred as ordering a beer and a shot. We’ve enjoyed the simple combination in dives, Irish pubs and even craft cocktail bars with some of the best mixologists in the world. But, of course, not every dram works with every pint. To help you make the perfect match, we consulted with Garrett Oliver, brewmaster of The Brooklyn Brewery and editor of The Oxford Companion to Beer, to get his favorite pairings. Cheers!

What could be more American than having a glass of bourbon with a beer chaser? Oliver recommends Woodford Reserve with a big, smooth imperial stout like his Brooklyn Black Chocolate Stout.

If you’re ever drinking in Amsterdam, you’ll no doubt see kopstootje on bar menus. The concoction, which means “little head-butt” in Dutch, is actually a shot of the malty gin relative genever and a beer (pictured above). “The best combination is Bols Genever with a snappy pilsner such as Brooklyn Pilsner or Victory Prima Pils,” Oliver says.

The spicy, complex flavor of rye whiskey is the ideal foil for, naturally, a complex brew. Oliver likes bartender favorite Rittenhouse Rye, which he would “follow with a snoot of J.W. Lees Harvest Ale.” The potent British barleywine is made in Manchester and will continue to develop in the bottle for years.

While many establishments pair tequila with light-bodied lagers like Tecate, Corona or Pacifico, Oliver instead prefers a dram of Casa Noble’s unaged Crystal with the dark and super-smoky Schlenkerla Rauchbier from Bamberg, Germany. It’s an unusual combo that we admit we would never have tried otherwise.