This Is Your Brain on a Motorcycle

Riding a motorcycle every day might actually keep your brain functioning at peak condition, or so says a study conducted by the University of Tokyo. The study demonstrated that riders between the age of 40 and 50 were shown to improve their levels of cognitive functioning, compared to a control group, after riding their motorcycles  daily to their workplace for a mere two months. 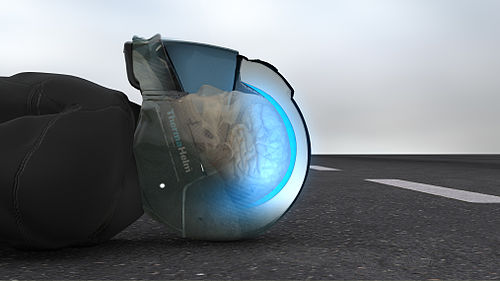 Scientists believe that the extra concentration needed to successfully operate a motorcycle can contribute to higher general levels of brain function, and it’s that increase in activity that’s surely a contributing factor to the appeal of the motorcycles as transportation. It’s the way a ride on a bike turns the simplest journey into a challenge to the senses that sets the motorcyclist apart from the everyday commuter. While the typical car-owning motorist is just transporting him or her self from point A to point B, the motorcyclist is actually transported into an entirely different state of consciousness .

Riding a motorcycle is all about entrance into an exclusive club where the journey actually is the destination.

Dr Ryuta Kawashima, author of Dr Kawashima’s Brain Training: How Old Is Your Brain, reported the outcome of his study of “The relationship between motorcycle riding and the human mind.”

Kawashima’s experiments involved current riders who currently rode motorcycles on a regular basis (the average age of the riders was 45) and  ex-riders who once rode regularly but had not taken a ride for 10 years or more. Kawashima asked the participants to ride on courses in different conditions while he recorded their brain activities. The eight courses included a series of curves, poor road conditions, steep hills, hair-pin turns and a variety of other challenges.

What did he find? After an analysis of the data, Kawashima found that the current riders and ex-riders used their brain in radically different ways. When the current riders rode motorcycles, specific segments of their brains (the right hemisphere of the prefrontal lobe) was activated and riders demonstrated a higher level of concentration.

His next experiment was a test of how making a habit of riding a motorcycle affects the brain.

Trial subjects were otherwise healthy people who had not ridden for 10 years or more. Over the course of a couple of months, those riders used a  motorcycle for their daily commute and in other everyday situations while Dr Kawashima and his team studied how their brains and mental health changed.

The upshot was that the use of motorcycles in everyday life improved cognitive faculties, particularly those that relate to memory and spatial reasoning capacity. An added benefit? Participants revealed on questionnaires they filled out at the end of the study that their stress levels had been reduced and their mental state changed for the better.

So why motorcycles? Shouldn’t driving a car should have the same effect as riding a motorcycle?

“There were many studies done on driving cars in the past,” Kawashima said. “A car is a comfortable machine which does not activate our brains. It only happens when going across a railway crossing or when a person jumps in front of us. By using motorcycles more in our life, we can have positive effects on our brains and minds”.

Yamaha participated in a second joint research project on the subject of the relationship between motorcycle riding and brain stimulation with Kawashima Laboratory at the Department of Functional Brain Imaging, Institute of Development, Aging and Cancer at Tohoku University.

The project began in September 2009 and ran until December 2010, and the focus of the research was on measurement and analysis of the cause and effect relationship involved in the operation of various types of vehicles and brain stimulation. The study measured changes in such stimulation over time by means of data gathered from a long-term mass survey.

The reason for Yamaha Motor’s participation in this project is pretty obvious and not a little self-serving, but further research into the relationship between motorcycle riding and brain stimulation as it relates to the “Smart Aging Society” will certainly provide some interesting results.

The second research project was divided into two time periods throughout 2009 and 2010 compared differences in the conditions of brain stimulation as they related to the type of vehicle and driving conditions. A second set of tests measuring the changes in brain stimulation over time involved a larger subject group.

Yamaha Motors provided vehicles for the research and made its test tracks and courses available for the study. What the study revealed is that what you’re thinking about while you’re riding – and your experience on the bike –  changes the physical structure of your brain.

Author Sharon Begley concurs with Kawashima’s findings. In her tome, Train Your Mind – Change Your Brain, Begley found much the same outcomes.

And you may also get some mental and physical benefits from just thinking about going for a ride on your machine.

A 1996 experiment at Harvard Medical School by neuroscientist Alvaro Pascual-Leone had volunteers practice a simple five finger exercise on the piano over five days for a couple of hours each day. Pascual-Leone found that the brain space devoted to these finger movements grew and pushed aside areas less used.  A separate group of volunteers were asked to simply think about doing the piano exercises during that week as well, and they dedicated the same amount of “practice time.”

Pascual-Leone was somewhat take aback to discover that the region of the brain which controls piano playing finger movement expanded in the same way for volunteers who merely imagined playing the piano.

Along with the obvious benefits of riding motorcycles; like saving money (motorcycle insurance is relatively inexpensive), motorcycles take the edge off the grind of the daily commute, and that appears to make your brain a better place to be…