Buy A Bar and a Motorcycle Collection All In One Go 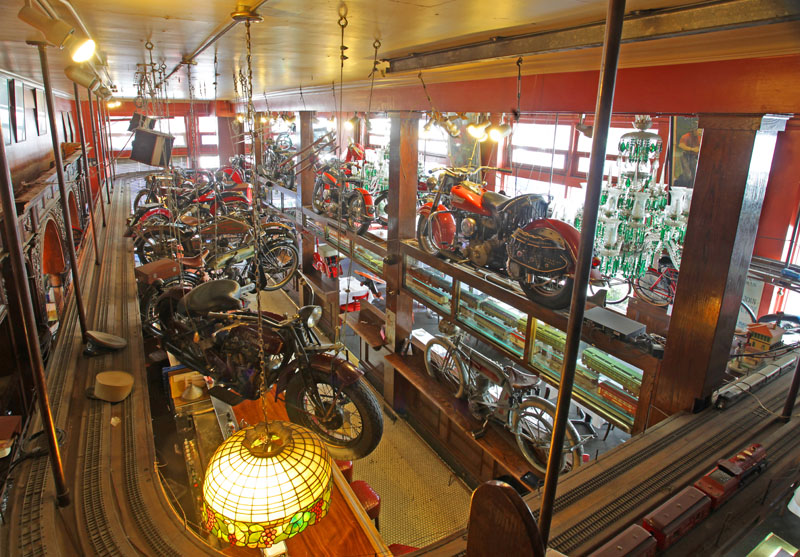 Motorcycles hanging from the ceiling of Eddie Rickenbacker’s bar and grill are heading to auction.

The motorcycles hanging from the ceiling as adornments in the famous San Francisco bar and grill, Eddie Rickenbacker’s, will be auctioned by the world’s leading auctioneer of motorcycles, Bonhams this August at Quail Lodge in Carmel, Calif.

Named after the Great World War flying ace and Medal of Honor recipient Eddie Rickenbacker, the watering hole and eatery was established by the eccentric and colorful Norman Hobday, a.k.a. Henry Africa, himself either an army veteran, former merchant marine, or escaped Legionnaire, depending upon which version is believed.

Hobday was renowned for his creation of the fern bar concept and invention of the Lemon Drop Martini. He wasn’t a motorcycle aficionado but after acquiring an old Indian during a search for antiques and then displaying in it his bar, he realized it brought lots of attention and subsequently acquired others. Soon Eddie Rickenbacker’s became known more for its décor – comprised of old motorcycles, toy trains and antique lamps – than its fare. Over the years Hobday’s collection grew to 30 vintage machines of various years, makes and models, each displayed either in the venue’s windows or dangled from its ceiling.

With the passing of Hobday last year, the collection of motorcycles from his San Francisco landmark has been entrusted to Bonhams, who will represent it at auction during the Pebble Beach Automotive Week this coming August.

Most of the motorcycles are American marques – Cleveland, Excelsior, Harley-Davidson, Henderson, Indian, Reading, however there are many British and European makes as well – Ariel, Monark, Moto Guzzi, Motosacoche, New Imperial, Nimbus, Peugeot and Triumph, among others.

The famous Eddie Rickenbacker’s Collection of motorcycles joins the extraordinary group of American motorcycles from a private European collection that includes the much anticipated and talked about three Crocker road models.  This impressive assembly of nearly 60 two-wheeled machines will be offered Thursday, August 16th at Quail Lodge in Carmel, California – the first day of the two-day automotive auction hosted by Bonhams.

With Thursday being dedicated to motorcycles, Friday (August 17th) will be dedicated to motorcars, such as the astounding 1997 McLaren F1 GTR racer that has the car world abuzz. Entries for motorcycles are now closed but Bonhams is still accepting entries of unique and important cars for consideration. Interested sellers may contact Mark Osborne in San Francisco at mark.osborne@bonhams.com or Rupert Banner in New York at rupert.banner@bonhams.com.

To register to bid, order a catalog, and to learn more about these motorcycles and/or motorcars, visit http://www.bonhams.com/quail.