Street Gangs at War With Hells Angels in London

London, Ontario Police Chief, Brad Duncan, confirmed the victim of a recent shooting on Grey Street was a member of the Hells Angels.

I know, those guys like to shoot each other over perceived slights or turf wars. So it was a member of the Bandidos who did the deed. Maybe a member of  the Outlaws checking out a new spot for a clubhouse?

Nope. It turns out it wasn’t a rival motorcycle club patchholder behind the attack, but members of a local street gang.

“As we continue the investigation, we are aware that the male victim, a member of the Hells Angles, has ongoing issues with local street gangs who are also known to police,” Duncan said. “Street gangs are associated to the drug trade, guns and firearms are involved, so they can be every bit as dangerous as the more traditional motorcycle clubs.”

The shootout began just after midnight in London and in the aftermath,  a man and a woman ended up in the hospital with non-life threatening injuries. 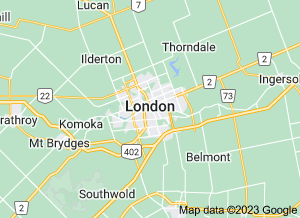 To make matters even more Old West, it seems police were present when the shooting went down.

“Over the course of the last couple of days, we’ve heightened our presence in a number of areas and we were present for a specific reason,” Duncan said.

According to the authorities, three occupants one vehicle involved in the incident are already in custody. A fourth suspect remains at large.

Duncan added that it’s possible the gang members are actually ’employees’ of sorts affiliated with the Hells Angels or Outlaws.

The shooting went down in a residential neighborhood close to a school, and that’s made the local constabulary downright peevish.

“We will not tolerate this open display of violence and we will work diligently to prevent further acts of violence,” Duncan said. “The message should be very clear to the individuals or groups involved.”