Buy Your Own Antique Motorcycle Collection, Lee Roy Hartung Auction Has Them All

Lee Roy Hartung loved motorcycles, and he had the taste – and the cash – to indulge his passion.

To that end, Hartung put together a collection of antique bikes to make the serious collector keel over in paroxysms of quivering joy. Hartung was 86 years old when he died in May, and now, when you open the door of Hartung’s barn in Glenview, IL., you’re greeted with the former salvage dealer’s collected life’s work. 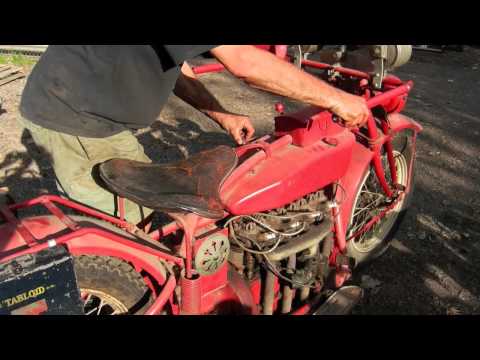 “It is a collection of everything,” said Ian Kelleher of Auctions America. “Cars, antique cars, motorcycles. Some of the most desirable motorcycles in the world.”

Kelleher’s not blowing smoke, Mr. Hartung’s collection also includes a some of the rarest early motorcycles, including an untouched 1911 Pope, a 1912 Sears Twin and a 1913 Flying Merkel Twin.

The collection of bikes come from it’s former owner’s Hartung’s Auto Museum near Chicago. It was impressive result of nearly five decades of collecting by Hartung, who once said that the items all came from accidental encounters and homes within 15 miles of his Glenview hometown.

“Every day we were there building displays and collecting and sorting things and it’s hard to say goodbye,” she said.”This is original dust. You can’t take the dust off. You can’t replace it.”

Some of the highlights of the collection? How about a 1915 Flying Merkel in outstanding original condition – which includes the original paint and components.

Not good enough for you? Need something more out there? Then maybe a 1912 Harley-Davidson Silent Grey Fellow – one advertised as “among the best 1912 examples in the world, ” fits the bill. It’s not only surprisingly complete, it runs like a top and is entirely in all original, fresh out of history, untouched condition.

If you really have the serious capital, you can choose from not one, but two running Indian 4’s, and they won’t go cheap…

For information about the auction, visit www.auctionsamerica.com

Insuring your collectible or vintage motorcycle

As for insurance? You should be able to get Agreed Value coverage on a 1959 BSA valued at $15,000 for somewhere around $25 a month, and that gives you the whole shooting match of coverage. You can spend a lot less, but if you plan to ride the bikes in your collection, the above pricing is a reasonable approximation of what you can expect to pay.